Welcome to Wednesday Night Live.  The games nobody is watching except if they are completely bored, attended the schools or have moneyed interest in how the game turns out.  It is never a good thing to be here on Wednesday Night Live in Nashville, it means that the season and more specifically the SEC slate of the season did not go so well.  For the four teams playing tonight for your bemusement, it is certainly the case.  Arkansas-Vanderbilt holds as much intrigue as watching the C-SPAN2 Book Review, so we’ll just focus on the Georgia-Ole Miss game where both teams will start a quixotic journey to accomplishing something against an opponent that provides an uncertain outcome. 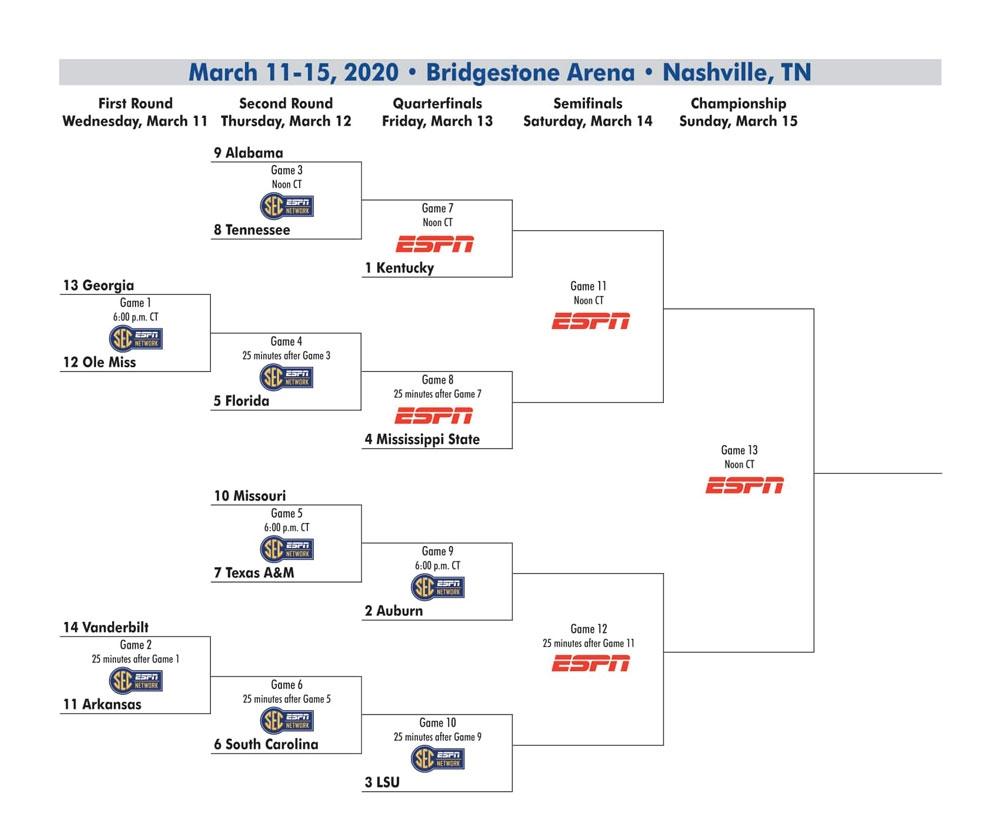 Georgia-Ole Miss has a pretty straight-forward result for the winner and loser.

The loser does not play anymore for the rest of the season.  What happens next is more uncertain for one program than the other.

In the case of Ole Miss, there could be a chain reaction of events where their Head Coach, Kermit Davis, lands in Starkville to coach his alma mater.  If not, then it is a conventional offseason of development and recruiting.

In the case of Georgia, it is a conventional offseason of development with the possibility of attrition and of course plenty of recruiting work to be done.  The likelihood of not going on a foreign tour is quite high unless the team wants to play in Hazmat suits.

The reward for the winner certainly appeals to Georgia, a team looking to avenge a pair of losses that were brought upon by blown double digit leads.

The Unreasonable Goal:  Winning five games in five days to earn the automatic bid in the NCAA Tournament.

The Reasonable Goal:  Getting to Saturday somehow to become attractive enough for an NIT berth. This means winning three games and then falling apart on Saturday just to play an opening round game of the NIT on the road.  It means more practices and more experience for both teams.  For Georgia, it would be a stepping stone opportunity in the complete rebuild of the broken Georgia Basketball program.  For Ole Miss, it means that the Rebels are not left for dead after a disastrous 2019 NCAA Tournament appearance.

Keeping it together and playing focused for 40 Minutes.  It sounds easy, but it is not.  Fighting the team’s worst instincts.

Overcome these things and Georgia is a team to be reckoned with against almost any opponent.  However, immaturity rules with this team.  Immature minds, immature bodies.

Georgia was burned against Ole Miss in Athens on January 25, 2020.  Why?  Georgia struggled with defending the ball screen, there was no physicality in the post against a team that was as strong down low as Arkansas, there was no ball movement, and the team checked out mentally throughout this game.  Poor shot selection, terrible decision making, and selfishness enabled Ole Miss to get the win 70-60.

Usage rates, assists rate, and the shot distribution tells the story of a team that cannot get out of their way offensively and it ends up harming the defensive effort.  There’s no consistency and no way to find it in a conventional sense because this is not a conventional team.

What is the surest sign of success for Georgia?  Is there a particular metric or aspect of the game to look for to know that Georgia has a strong chance of winning the game.  The answer is ‘yes’.

When Georgia is disruptive defensively, the team’s chances of winning rise significantly.  Why?  The team gets more transition scoring opportunities.  This is not a team that presses, they should but that’s a different matter.  When the ball is traveling in the air, this is Georgia’s opportunity to make something happen on the defensive end.

These are all of the games where Georgia had a blocks rate of above 10%.  Georgia was 8-2 against Division I opponents when they achieved this figure.

What happens when it is below 7%…

Georgia is a 5-9 team in these games.  The team is also 5-9 when they attempt more than 40% of their shots from three point range.

Flip that horrible record to 9-5 when the team shoots 37.5% or less of total field goals from three point range.

Turnover rate cannot always be controlled, but shot selection is something that can be tweaked.

There is no ball movement on an iso.  It’s basically Anthony Edwards trying to show off for scouts in attendance.  Does the lack of ball movement lead to wins for Georgia?  No, just the opposite.

In Georgia highest 15 games of Assist Rate, the team sported a 10-5 record.  The rest of the season, Georgia is a 4-11 team against Division I competition.  Double that 10-5 record and that is an NCAA Tournament qualifying team.

To hammer home the point, Anthony Edwards as a distributor was an impact player.

When it came to Edwards, there was such a thing as too much Edwards.  Edwards was important, but when things went too far, the team would lose.  When Edwards scored more than 30 points in a game, Georgia went 0-3.  When he scored between 20-30 points, the team was 7-2.

With Edwards, there was no need for isos, he just needed to find his balance as a scorer and distributor.  He was going to get his opportunities.  There actually was a sweet spot for him!  If he attempted between 14 and 17 Field Goals in a game, Georgia was a 10-4 team against Division I opposition.

Sahvir Wheeler played a huge role in the ball movement of this Georgia Basketball Team.  In fact, without him, there would be none.

Setting up the X-Factor (Rayshaun Hammonds)

If Hammonds scores 15 or more in a game, Georgia is 8-3.  It gets even crazier than this.

Peake has a high upside as a rebounder and an offseason will help him a lot.  Peake is the most explosive frontcourt presence since Chris Barnes in his Freshman Season at Georgia.  Georgia is 6-2 in games where Peake grabs an offensive rebound.

In fact, it goes beyond the glass.  Peake’s general involvement is a good sign for the team.  Minutes mean nothing, usage rate tells the story.  When is on the floor and involved more than 15% of the time, Georgia is 7-2.

Chris Barnes suffered an ACL injury during his Freshman Season during an explosive effort against Tennessee in 2008.

Barnes was a force on the offensive glass during his time at UGA and he was an able shot blocker, but he was not a strong Free Throw shooter nor scorer.

Peake has many of the same physical capabilities.  Peake was a stronger offensive rebounder in AAU with MoKan Elite, but he was doing it as an undersized player (in strength) against less developed players.

The last player to show such ability on the defensive glass at Georgia was Derek Ogbeide.  Nicolas Claxton had double digit percentages in both offensive and defensive rebounding rates.  Mike Peake is behind Claxton in length and Ogbeide and strength at this stage.

Physically and based on the metrics, Barnes and Rayshaun Hammonds can provide a good comparison and leaping off point as far as tracking development.

An eye-popping Christian Brown metric that is tough to believe.

Christian Brown has been a bench player this season who has had his ups and downs.  He makes plays at the rim, has shown he can hit three point shots, rebound, and get steals.  The steals stand out, especially during conference play.

Christian Brown has played 21% of the possible minutes he could earn during conference play, he has a 3.4% steals rate in conference play.  Overall, during the season, he has sported a 2.6% steals rate.  This means that he has been more disruptive with getting steals against SEC teams than against a schedule comprised of mostly low-major programs.

J.J. Frazier as a freshman played 24.2% of the possible minutes he could earn during conference play, he had a 2.8% steals rate.

The last freshman to sport a higher steals rate at Georgia while being a part of the regular rotation was Kentavious Caldwell-Pope.  Caldwell-Pope was playing a lot of minutes and sported a 3.7% steals rate on a dismal Georgia Basketball Team.

Marcus Thornton played similar minutes as a freshman, he had a 3.2% steals rate.

Can Georgia channel the good of what they can do into this game?

Sure, but will they?  It’s tough to predict.  Can Breein Tyree be contained in this game?  That’s what it comes down to and who will guard him?  Does the person who is designated to guard him actually want to play defense?

With this Georgia team, everything is optional.  Take a lead, let’s show off.  Getting pummeled, let’s try showing off anyway and pad stats while not trying to forge a comeback.

Rayshaun Hammonds should have a much better game against Ole Miss than he did in Athens.  Hammonds taking over the game and someone stepping up to defend would be an encouraging development, but do not confuse it for a trend.  Khadim Sy will not have as easy of a time and this is a team that is less spooked in the interior having not played Mississippi State or Kentucky in a while.

The offseason could not come soon enough, but more experience and game videos should aid the offseason work for this young group of Dawgs.